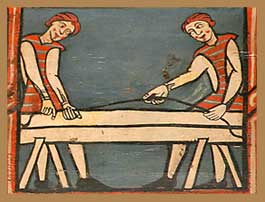 When I was 7 my father called me out to the patio to help him as he was building a bookcase. He told me to hold a string to the end of a board, hold it tight and don’t let go. He snapped the string, there was a mini-explosion of dust and a blue line appeared on the board. My reaction was something like this:

So, you might not be surprised I have a collection of line snaps.

What I find appealing about snapping a line (besides the magic blue line) is it is an ancient method used by carpenters, masons and artists. It is not complicated and it works. Ancient Egyptians used red and yellow ochres and black inks for their lines. We can still see traces of the lines used on wall paintings to divide panels and keep figures in alignment. 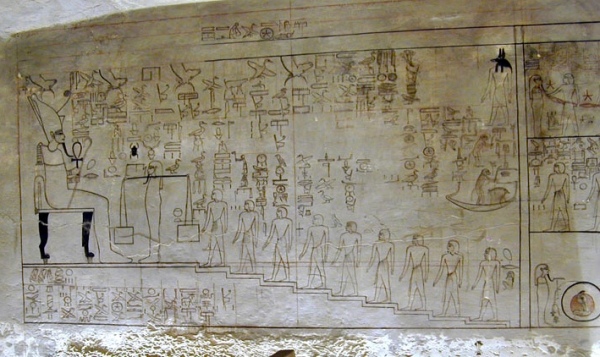 One of the folktales about Lu Ban, legendary carpenter of China (born around 500 B.C.), is about how he taught stone masons the use of the ink line marker. It is said the ink marker was one of the tools he always carried with him. 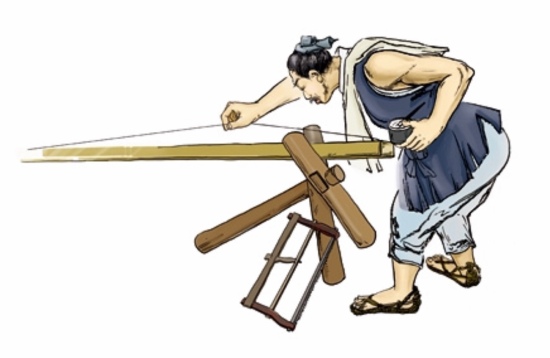 Isaiah 44:13: The carpenter stretcheth out his rule; he marketh it out with a line… 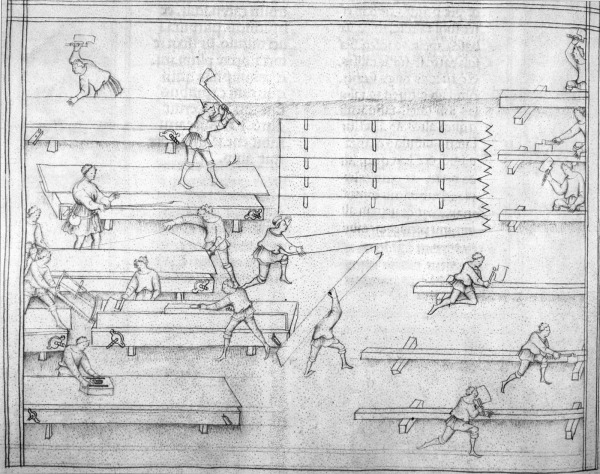 Although we can’t see what kind of marking tool is used, the carpenters in the third row down on the left are about to snap a line. 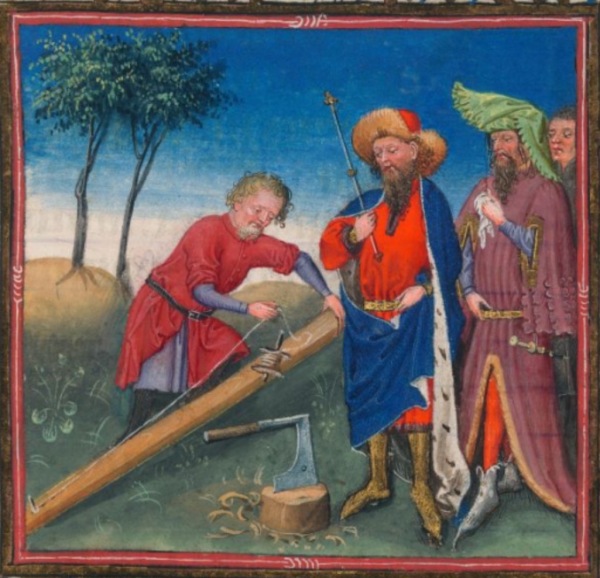 This is captioned as “Solomon observing the measuring of the timber.” We know the carpenter is going to snap a line. 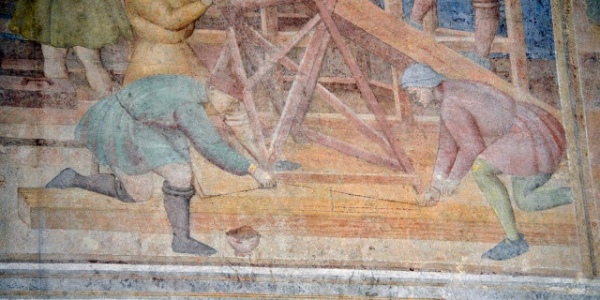 In this Ark scene it appears a line will be cut at an angle across the board rather than the board’s length. The ink pot is near the foot of the carpenter in blue. 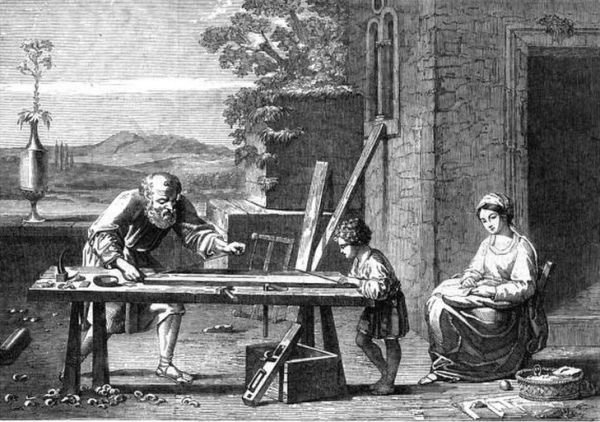 Engraving of the painting known as The Raboteur, attributed to Annibale Carracci, late 16th or early 17th century.

It probably isn’t too far off the mark to state most of the line snapping in the New Testament is to be found in scenes of Jesus helping his Joseph. Here again, only the line can be seen. 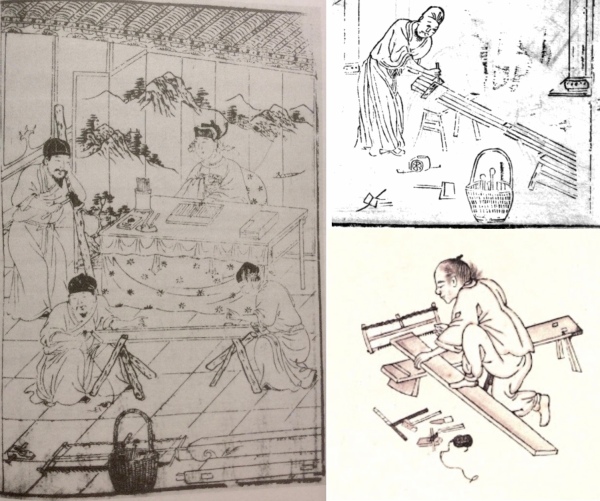 The scenes on the left and top right are from various sections of the “Lu ban jing” written around 1600. On the left a line is about to be snapped; at the top right the carpenter’s modou is on the ground (look for the wheel). On the bottom left is a Korean carpenter with his line marker positioned with his other tools. The artist is Kim Jun-geun, who documented many tradesmen in a vernacular style (late 19th to early 20th century). 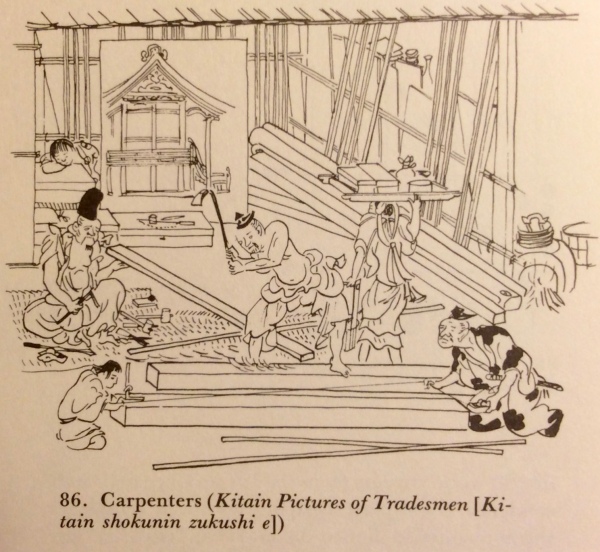 In the foreground the older carpenter holds the sumitsubo and is about to snap the line as the apprentice holds the end.

This scroll was made using paint and ink on silk. It shows consecutive tasks: marking a log to be split, snapping a line on a board to be cut or split, carpenters sitting on a board and splitting it in two. 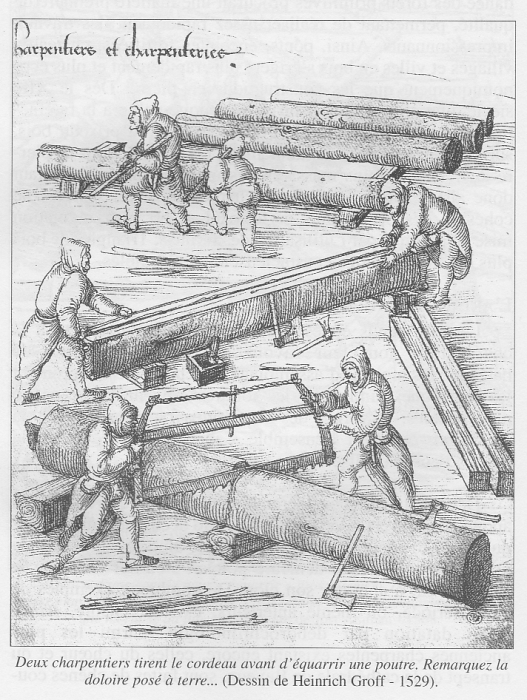 In the middle of the scene the inked line has been stretched and the square ink box is nearby on the ground. 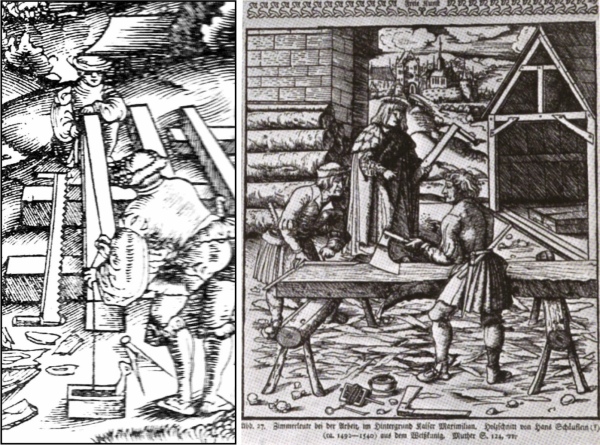 Both of these images are 16th century German. On the left the line has been pulled from the ink box, on the right the reel with wound-up line is on the ground with a round ink pot(?) to the right. 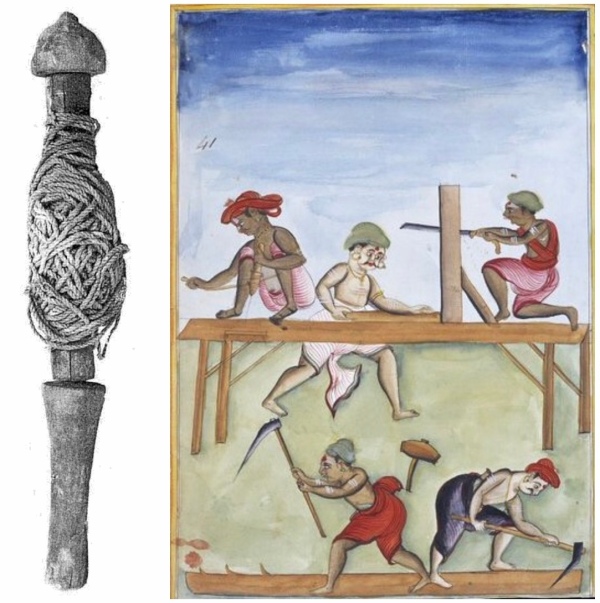 The mason’s line has a rotating spindle and bears a strong resemblance to the spindle held by the Indian carpenter (top left in the painting). 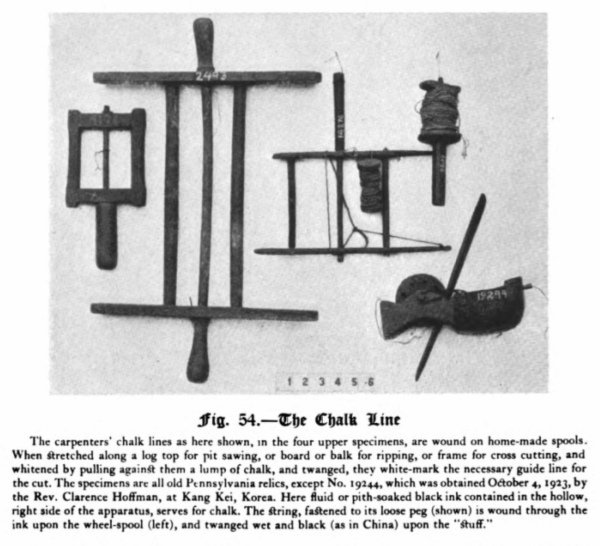 The majority of the spools and reels shown were types used in Europe and the Americas. The one outlier is the Korean line marker (bottom right) from Kangkei (now known as Kanggye). Note: Henry Mercer wrote “twanged.” 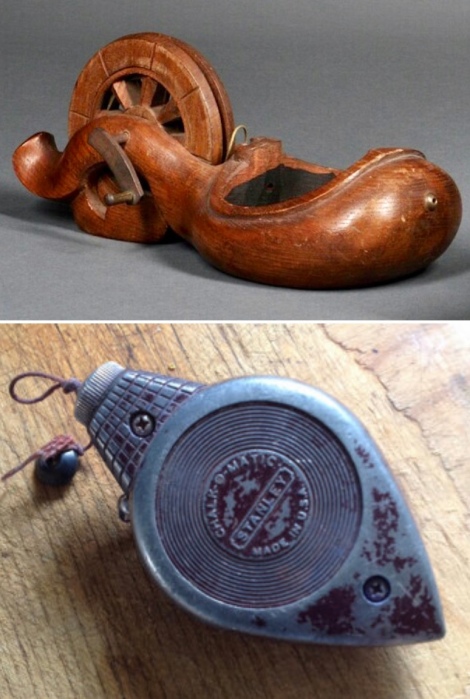 The Japanese sumitsubo is still used today (as are more modern line markers). The 20th century Stanley chalk line with the very American name “Chalk-O-Matic” is still found in many a tool box.

As the handle on the sumitsubo is turned, string unwinds from the wheel and is pulled over ink-soaked cotton wool in the bowl and exits through the hole on the end. Chalk is enclosed in the Chalk-O-Matic and as the string is pulled out it gets a nice coating of blue chalk and basically works the same as the sumistubo. 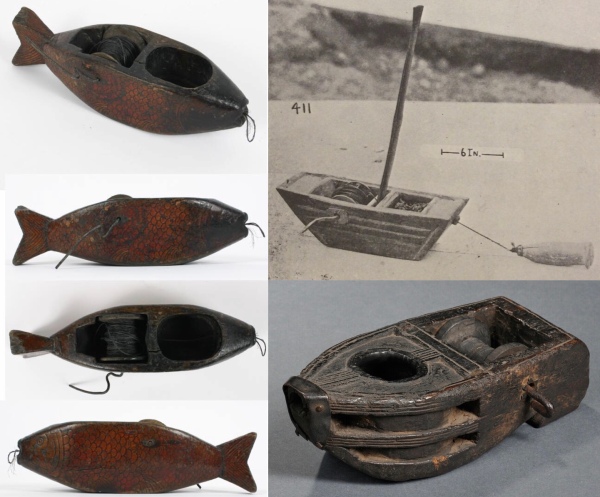 My favorites: on the left a beautifully scaled fish sumitsubo; top right is a Chinese shipwright’s mondou (from the book “China at Work” by Hommel), bottom right is another boat-shaped sumitsubo (Skinner Auctions). 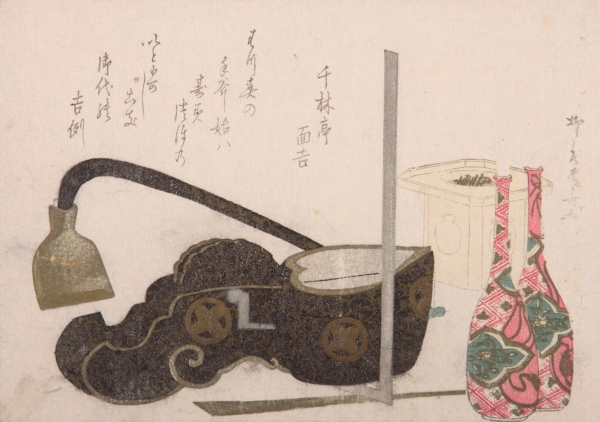 The Japanese sumitsubo and try square are often pictured together in woodblock prints. And there’s a reason for that. 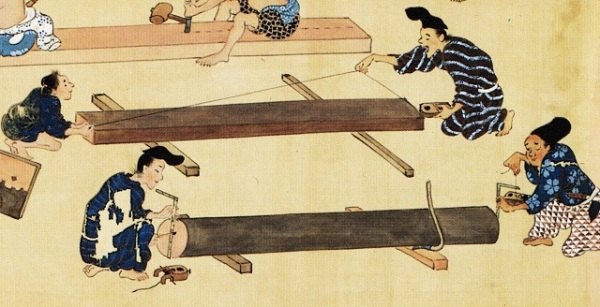 Taking another look at a detail in the Takashina Takakane scroll you can see both carpenters in the foreground are using a sumitsubo and a square as a plumb-line. 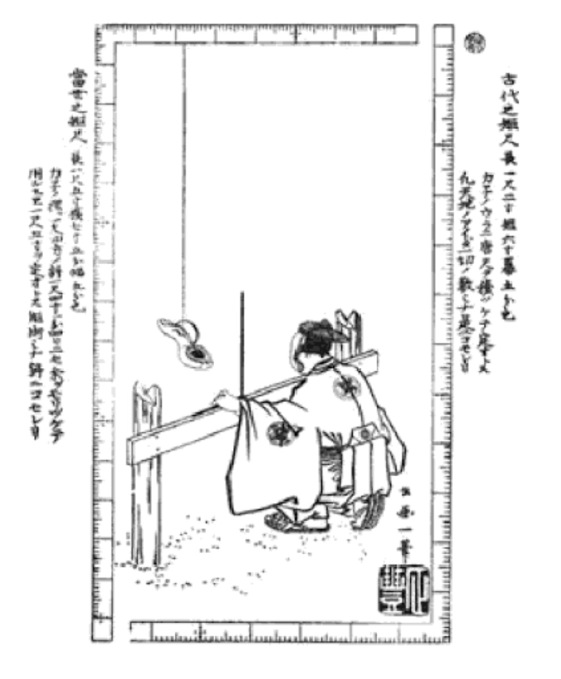 Another illustration of how the two tools are used together as a plumb-line. 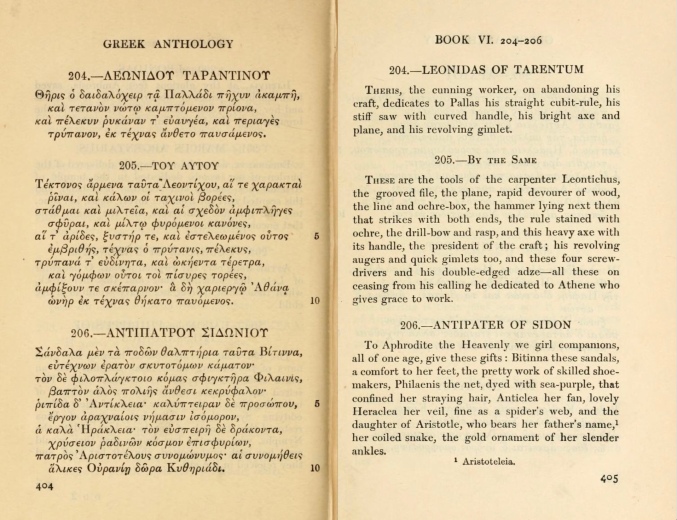 Ancient Greek carpenters also used snap lines (of course they did). They used red and black lines. Although I don’t have an image there is a passage from “The Greek Anthology” by W.R. Paton in 1916 that you might like to read (a translation of the Anthologia Palatina). Numbers 204 and 205 are by Leonides of Tarentum, a poet from the 3rd century B.C.  Click on the image to make it easier to read in either Greek or English.

The gallery has a few more selections.

40 Responses to Snap a Line!