A Race Against Time with ‘Welsh Stick Chairs’ 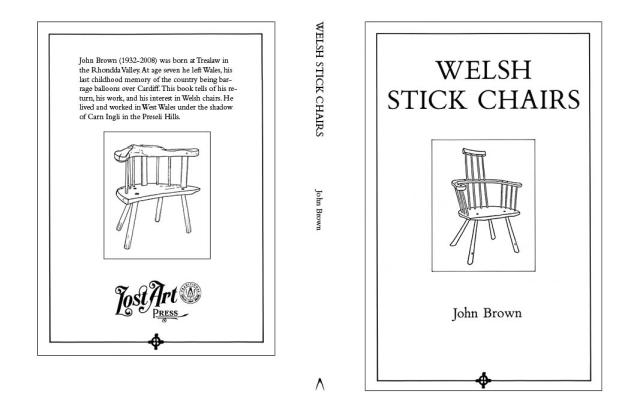 With a little luck, we hope to have “Welsh Stick Chairs” in your hands in June 2018 for the 10-year anniversary of his passing. Today I uploaded the final files to our printer and they should start production on the book on Monday afternoon.

We hope to open pre-publication sales of the book next week. We’re still waiting on a couple elements of the print job to make sure we have the costs correct. We’re shooting for $27 to $29, which will include domestic shipping.

Note that we have the rights to distribute “Welsh Stick Chairs” only in North America. Not in Europe, the UK or – oddly enough – Wales. We’ve been told another publisher in the UK will be publishing a version for that market. But we don’t know when or what it will look like.

Ours will be printed in the United States on heavy and smooth coated paper. The signatures will be sewn for durability. And the book will be covered in heavy 100-pound Mohawk cardstock with a vellum texture. (We love Mohawk paper – it’s made with wind power.)

The dark blue cover will then be stamped with a matte silver foil. It’s going to look crisp and have a lot of nice textures.

Publisher of woodworking books and videos specializing in hand tool techniques.
View all posts by Lost Art Press →
This entry was posted in Uncategorized, Welsh Stick Chairs by John Brown. Bookmark the permalink.

7 Responses to A Race Against Time with ‘Welsh Stick Chairs’