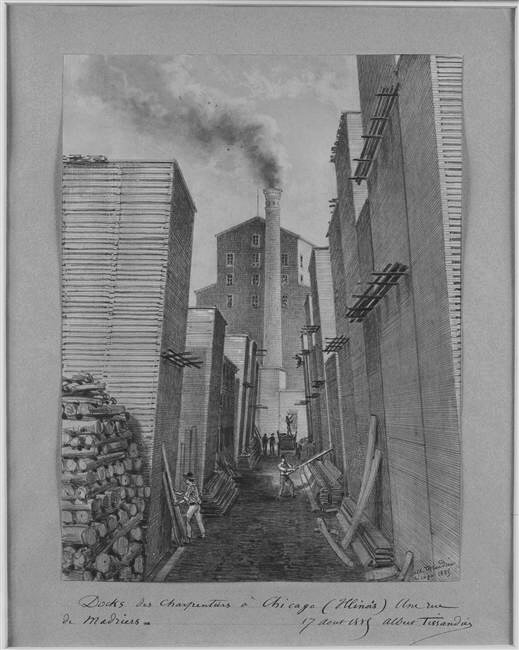 In a few days America will be celebrating Independence Day, and I thought a brief history of the Chicago and Great Lakes lumber trade in the 19th century would be in order. The Great Lakes region is one of our treasures, and Chicago is at the great heart of our country.

The opening lines of “Chicago” by Carl Sandburg:

As the great timber stands in the East were exhausted and settlers moved west new sources of pine and other woods were needed.

The dense forests and extensive waterways of the Great Lakes, especially Michigan and Wisconsin, became the source for the lumber needed to build the barns, fences, homes and businesses of the settlers. Chicago was perfectly situated on Lake Michigan to receive and distribute lumber by water and railroad links.

Chicago’s commercial lumber business started in 1833. But it was the opening of the Illinois & Michigan Canal in 1848 that transformed Chicago from a supplier for local markets into a national distribution center for lumber. And by the second half of the 19th century, Chicago was the world’s largest lumber trade market.

The canal ran from the Chicago River at Bridgeport to the Illinois River at LaSalle and opened a direct link to the Mississippi River and the Gulf of Mexico. With this North-South water link, and later with railroad networks, Chicago became the world’s largest lumber trade market.

Wisconsin-Michigan map, 1844. Map collection of the University of Alabama.

This 1844 map shows the extensive network of drive-able streams and rivers that could be used to move lumber to mills on the coast of Lake Michigan before transport to Chicago by ship. 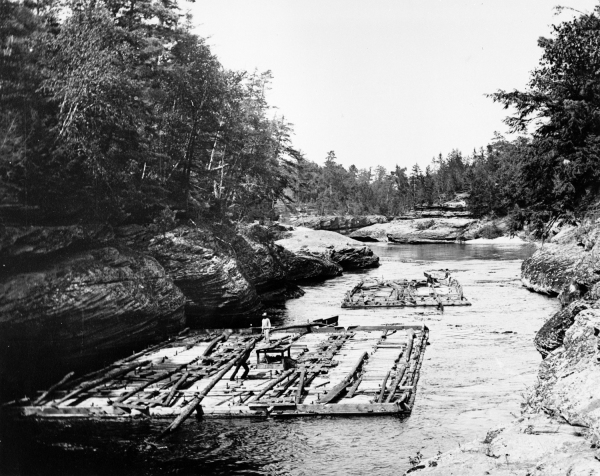 As the forest cuts progressed further inland, and before narrow-track rail lines were introduced, loggers had to find faster means of moving logs to nearby waterways. When rail lines penetrated the forests, hardwood supplies to the Chicago yards were increased.

In winter, logs were moved on paths with ruts for sled runners. The paths were sprinkled with water to keep the ruts iced. In the sled photo above, the number 7,225 marked on the topmost log is the number of board feet in the load. In 1875, the “big wheel” was invented by Silas Overpack, a carriage builder by trade. The big wheel came in three sizes from 12′ to 18′ high. Logs 12′-15′ long could be carried beneath the axle, and by lifting one end of the log it was easier to move them.

The junction of the Chicago River by Louts Kurzin, 1866 (Lewis Univ.). The location of the T.M. Avery Lumber Company (on the left in the drawing) is marked on the map.

Following are excerpts from “History of Chicago” (1886) by Alfred Theodore Andreas that describe the growth of the lumber trade within the city. He also describes the rise of hardwoods for the furniture trade, which is linked to the expansion of railroads from the Great Lakes states.

“In 1868 a movement was started to transfer the lumber business and yards to what has since been known as the New Lumber District. A series of canals was excavated by the South Branch Dock Company, extending from the River to Twenty-second Street, affording a dock front of twelve thousand five hundred feet, which, together with the river front adjoining, makes a total dock front of nearly three miles. These canals are one hundred feet wide, and were, at first, eleven or twelve feet deep; since then, they have been dredged to the depth of from twelve to fourteen feet.”

“The lots owned by the South Branch Dock Company were one hundred by two hundred forty-four feet in size, each having a dock and street front, and being furnished with a switch track connecting with the Chicago, Burlington & Quincy Railroad, thus placing them in direct connection with the entire railway system of the Northwest. These lots were rented to lumber dealers at ten dollars a foot per annum. In 1868, the lumber trade of Chicago reached the enormous proportion of nine hundred and ninety-four million feet, and this immense trade moved southward to the new district as rapidly as it could find accommodations. In the spring of 1869, about forty lumber firms were doing business, besides eight first-class planing mills.”

1876(?) map showing the location of the New Lumber District and canals off the South Branch of the Chicago River (blue) and a major rail head (red). Library of the University of Chicago.

“The increase in the amount of lumber handled in the Chicago yards became so great that a still further extension of facilities was imperative, and, in 1881, another district was added upon the South Branch of the river, extending from Thirty-fifth Street to the city limits at the Stock-Yards…Here, in 1884 occurred the first extensive conflagration originating in a Chicago lumber yard. This fire commenced in the yard of the Chicago Lumber Company, being ignited by a spark from a passing locomotive. It was not checked until twenty million feet of lumber and one hundred million shingles, aggregating in value about $400,000 had been consumed.” (In 2017 dollars the loss was about $9.4 million.)

“The use of hardwood lumber gradually increased with the establishment of manufacturing interests particularly that of furniture, and in 1885, the number of yards of this character increased to thirty, handling an average of about three hundred million feet of hardwood lumber annually, and carrying stocks averaging about forty-five million feet, embracing all varieties of native timber with a liberal supply of foreign woods. The volume of trade in this department comprises, at the present [1886], about one-sixth of the sum total of the lumber trade of the city, its supplies being drawn from nearly every one of the Western, Northwestern and Southern States.”

“The lumber yards of Chicago, in 1885,  if consolidated in one, and the lumber piled in a solid body, twenty feet in height, would probably occupy a space fully one mile square; but spread as the business is, through various parts of the city, it occupies a dock and stock frontage of probably twenty miles. In the transportation by lake, not far from five hundred sailing craft are employed, landing eight thousand cargoes a year. In addition, not less than thirty thousand railroad cars, averaging ten thousand feet a car, are employed in supplying the yards.”

When Carl Sandburg’s poem “Chicago” was published in 1916, the city’s lumber trade was well past its peak. The great northern forests were near or at exhaustion point and even with a shift to tapping into southern supplies of yellow pine, made possible by rail transport, the economics of lumber distribution had changed. Rail transport had also made it more economical to ship lumber to nearby mills and specialized manufacturing plants rather than send it to Chicago for storage and further transport.

The Great Lakes lumber trade with Chicago at its center helped fueled immigration needed for the labor force, expansion of the railroads, innovation in the logging business and provided materials needed for our country to grow. Chicago was, and still is, our crossroads. 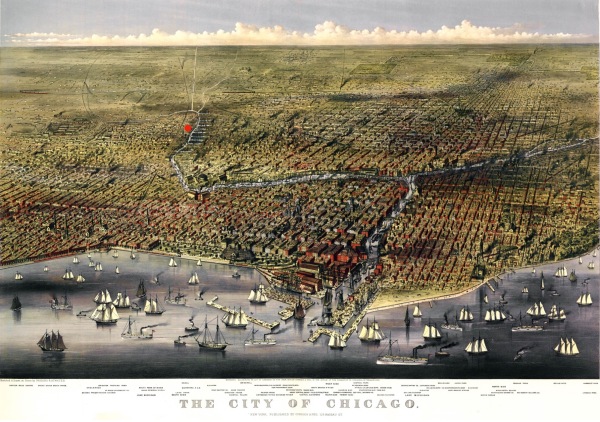 Currier and Ives map of 1874. The lumber yards and canals are marked with a red dot. Library of the University of Chicago.

If you enjoy reading old lumber business directories with statistics, ads and other sorts of miscellany you can find “Hotchkiss’ Lumbermans Directory of Chicago and the Northwest” of 1886 here. There is an option to download it as a pdf.

The gallery at the bottom  includes  some statistics on the lumber trade, a few more images, a short history of the T. M. Avery Lumber Company (seen in the drawing of the junction of the Chicago River above) and an account of a yard fire.

This entry was posted in Historical Images, Personal Favorites. Bookmark the permalink.

2 Responses to Chicago and the Great Lakes Lumber Trade