A Walk in the Woods in February

I love the smell of ponderosa pine in the morning…. Smells like…vanilla.

We’re going to travel a little further afield today, but first, a correction: Last time, I posted a photo that I claimed was of a tuliptree, but as A Riving Home pointed out in the comments, the photo was actually of a mockernut hickory (Carya tomentosa). What happened was that I had taken photos of both, but at the last minute decided to save the hickory for a later post, and then managed to mix up the photos. Here’s the real tuliptree: 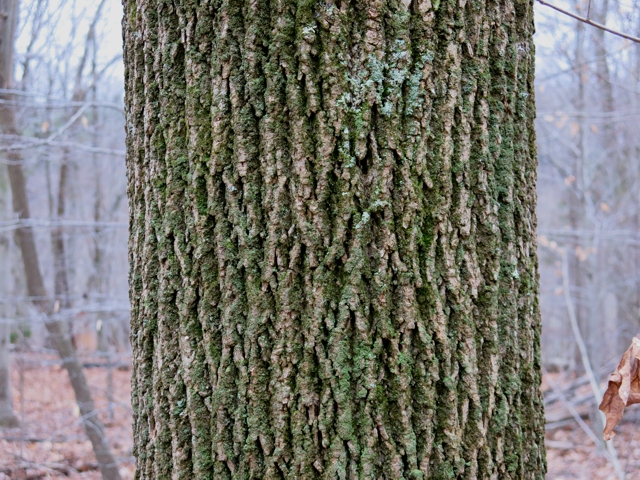 In February, the forest begins to show signs of renewed life. The earliest migrant bird, the Eastern Phoebe (Sayornis phoebe), has arrived, and the resident species are singing their hearts out. There’s some color seeping into the grayness of the landscape, and on a warm, rainy night, you might hear a chorus of spring peepers (Pseudacris crucifer). By the end of the month, some of the trees have begun blooming. The most noticeable of these are red maple (Acer rubrum), with its deep red flowers, and silver maple (A. saccharinum) with dull orange flowers. The pinkish flowers of American (Ulmus americana) and slippery (U. rubra) elms quickly give way to pale green flying saucer-shaped seeds.

Some shrubs begin leafing out in February as well, but these are nearly all non-native plants, such as Amur honeysuckle (Lonicera maackii) and autumn olive (Elaeagnus umbellata). The native plants know that there’s still a good chance for a hard frost, so they wait.

We begin in an area of bottomland near the Hocking River here in Athens County, where there are a couple of species that dominate. First, one of the easiest of all trees to identify: 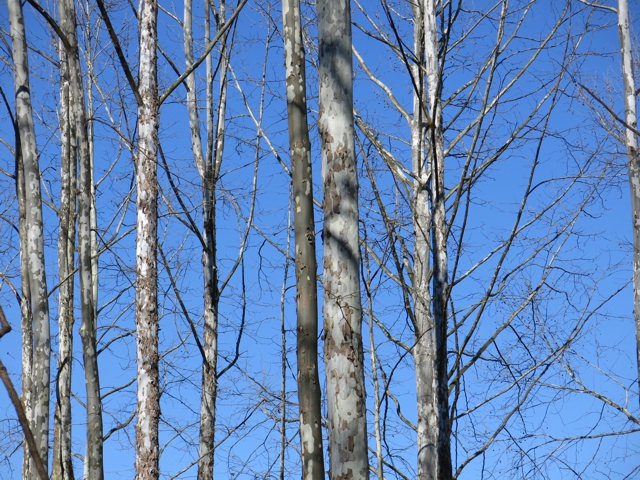 The patchy, ghostly white and gray bark of the American sycamore (Platanus occidentalis) always stands out against the gray backdrop of the winter forest. Close up, the lower portions of the trunk are covered in numerous small, brown scales: 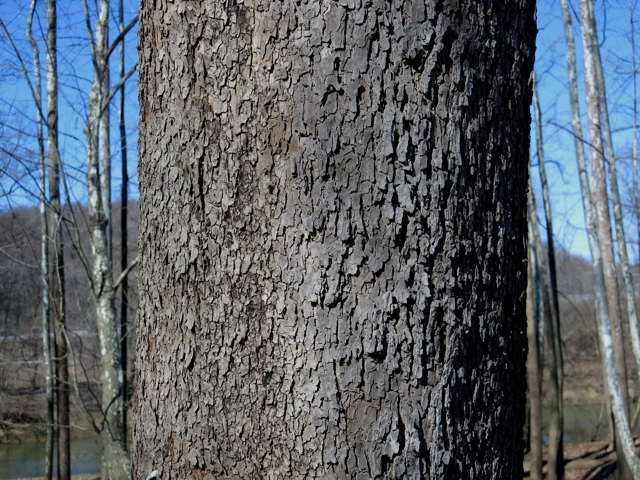 The other dominant bottomland tree in this area is the often huge eastern cottonwood (Populus deltoides): 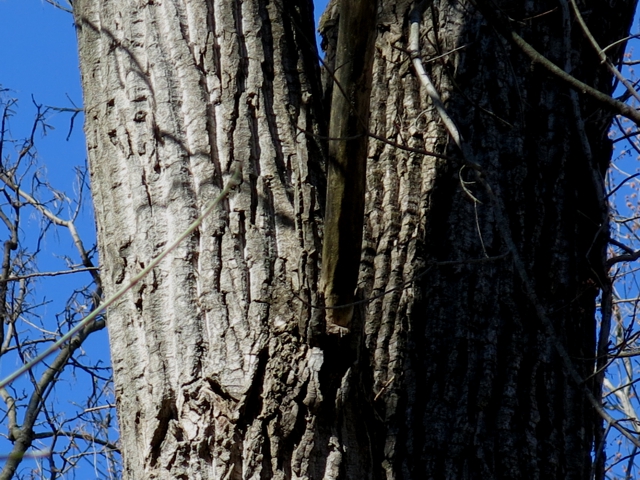 Its bark is deeply and coarsely furrowed, with the ridges being more or less flat-topped.

Both of these trees can be found further up slope, but it’s always a sign of abundant ground water when they are. In particular, you can find these trees along ravines and exposed layers of porous shale, where the soil is always wet. These layers of shale correspond with coal seams, in this area the Middle Kittanning or “No. 6” coal.

One of the most important trees to a woodworker is black cherry (Prunus serotina): 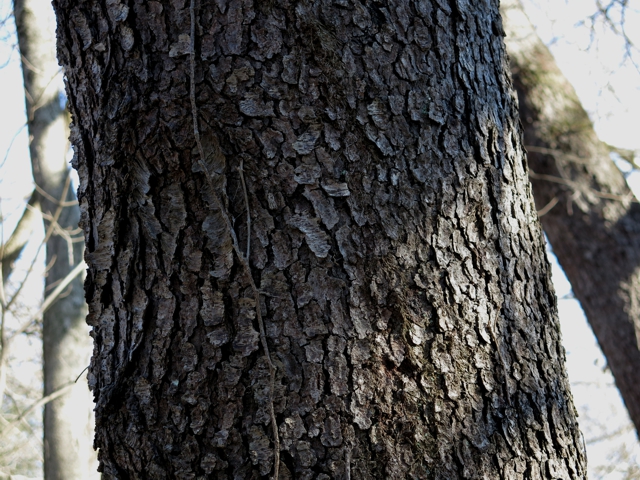 Further north and at higher elevations, black cherry can be the dominant species in a forest, but around here it’s mainly found as scattered individual trees, usually but not always near water. The bark is dark, brownish-black, and broken up into oval scales that curl up around the edges. Another feature of cherry trees is that they are almost never straight. This is because as the tree grows, the main stem has a pair of terminal buds, rather than just one, and one of the buds “wins,” depending on the lighting conditions. Thus, each year, the tree heads off in a slightly different direction.

We’re going to move up slope now, to some forested land that my wife and I own just over the county line, in Meigs County. A close relative of the eastern cottonwood is bigtooth aspen (P. grandidentata): 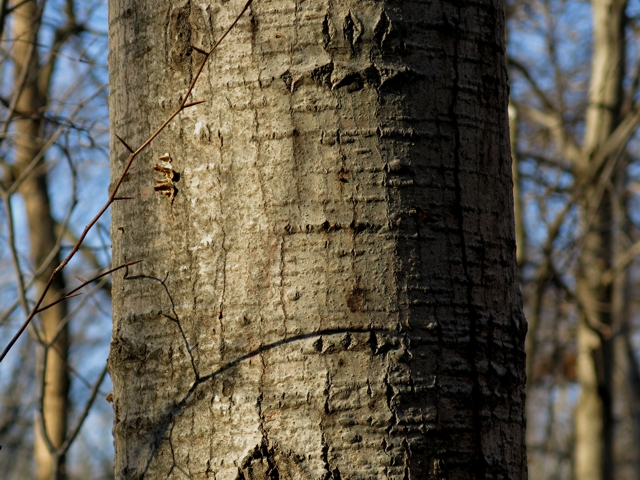 The bark is a medium gray, sometimes with a gold sheen, and interrupted by a combination of horizontal ridges and vertical splits. Further north, quaking aspen (P. tremuloides) replaces bigtooth aspen; its bark is similar but whiter. 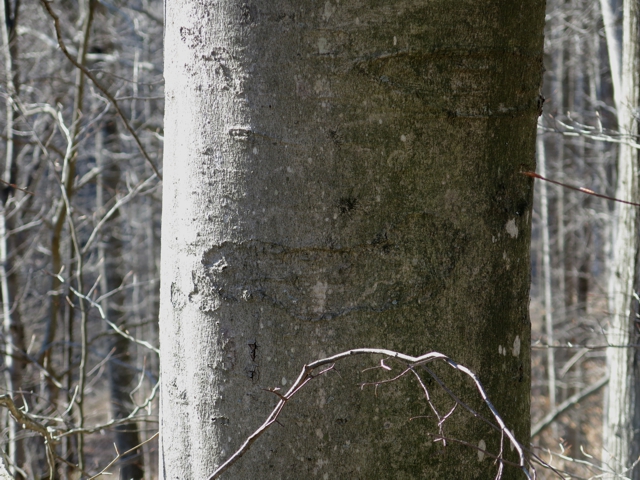 There are several species of hickory in the forests, most of them difficult to tell apart. The aforementioned mockernut hickory is fairly common: 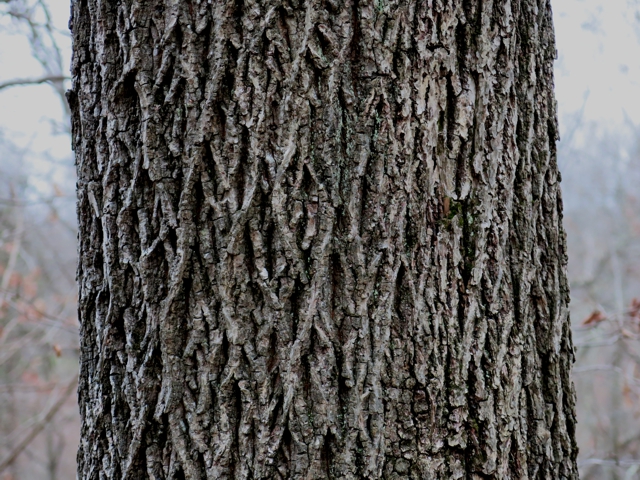 The bark has the sort of criss-crossing X ridge structure that many of trees in the forest have, but in the hickories, these ridges tend to look as if they are strands braided together. This is more apparent in a young tree: 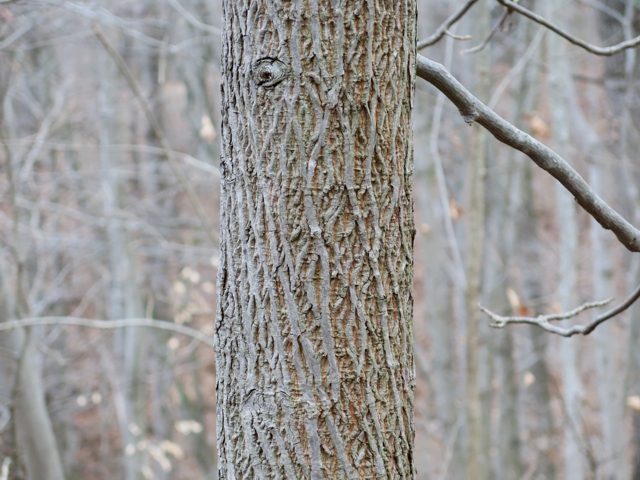 One species of hickory that is not hard to identify is shagbark hickory (C. ovata). Although the braided pattern is obscured, you can still kind of see it if you squint; it tends to be more obvious near the base of the trunk: 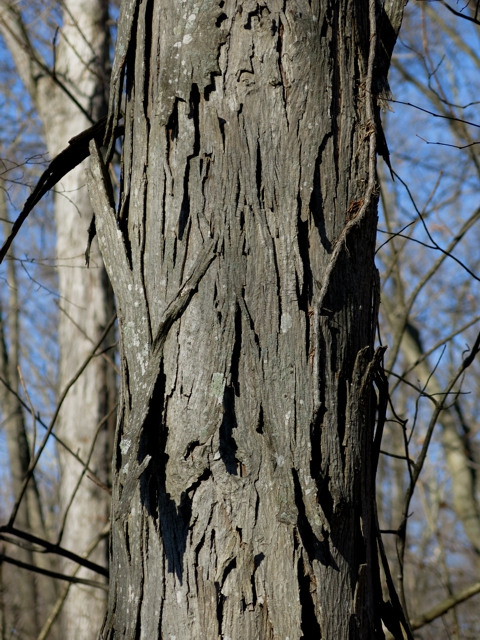 Pines are tricky. A big part of that is that people plant a lot of pine trees, and the species that they plant are very often not native to the area, so you never know what you’re looking at. Around here, only one native species of pine, Virginia pine (Pinus virginiana), is common: 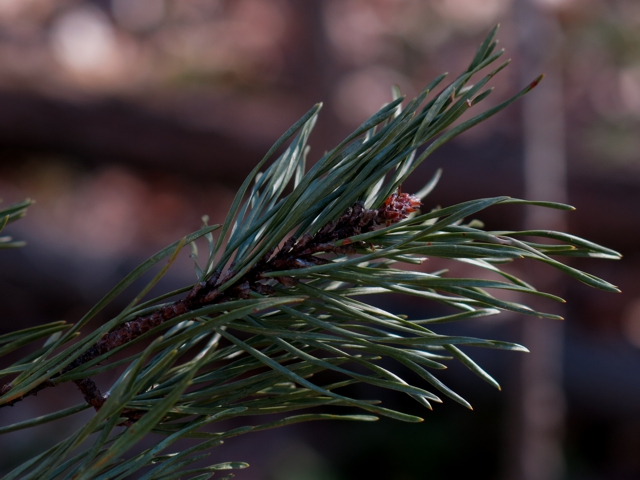 It’s characterized by relatively short (about 2″/5 cm) paired needles that are flattened and somewhat crescent-shaped in cross section, and usually twisted.

The other pines that occur in the area all have much longer needles: eastern white pine (P. strobus), pitch pine (P. rigida) and shortleaf pine (P. echinata). It generally takes a combination of characters (number of needles in a bundle, shape and size of the cone, etc.) to distinguish these species.

Ponderosa pine (P. ponderosa), a species of the western half of the United States, really does smell like vanilla, although you have to get your nose right up to the bark to notice it. You won’t find any ponderosa pines growing around here, but you might nevertheless find it at your local home center; the clear pine boards are often cut from that species.

Not everything in the forest is a tree, of course. There is a ground-hugging plant that looks strangely like a conifer of some kind: 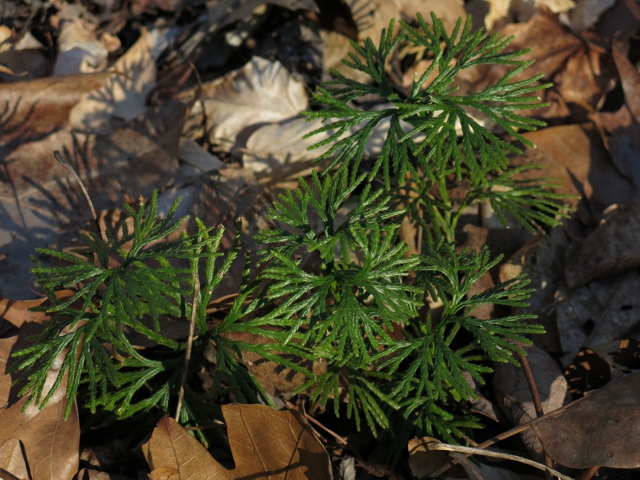 And one of its common names is indeed “groundcedar.” In fact, though, it’s not a conifer at all, but rather a member of an ancient lineage of plants, Lycopodiophyta, and not closely related to any of the more typical plants. This one is the fan clubmoss (Lycopodium digitatum).

Sedges (Carex sp.) are a rather overwhelming group of grass-like plants; there are about 2000 species worldwide, and 140 just in Ohio. One of the most common is eastern woodland sedge (C. blanda): 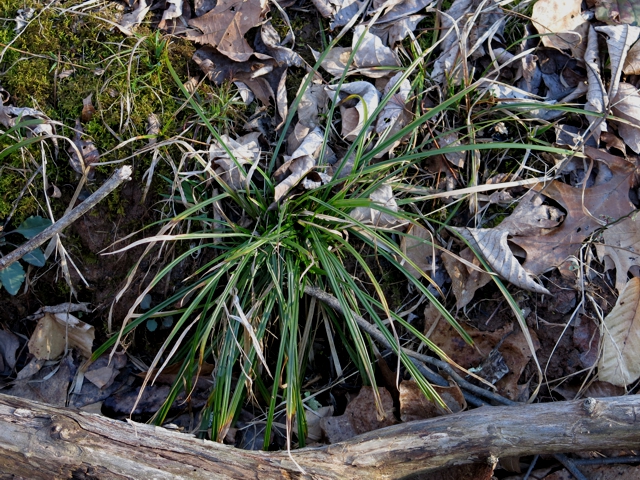 There are many species of ferns in the forest, but these two are the only ones that are likely to remain green in winter: 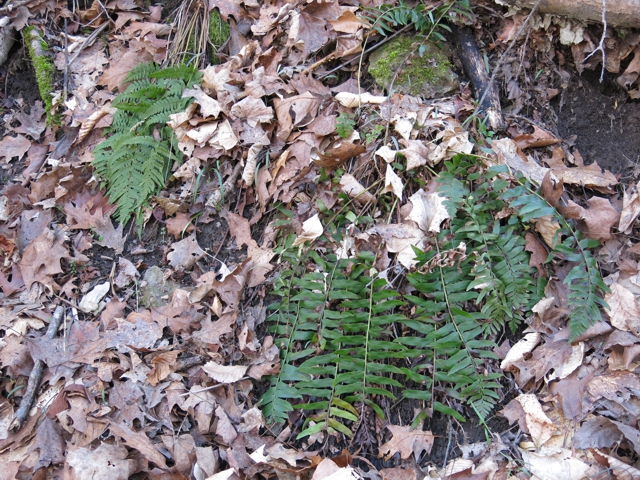 The marginal woodfern (Dryopteris marginalis), on the left, may die back to the ground in very cold winters, but the Christmas fern (Polystichum acrostichoides), on the right, stays green regardless.

The marginal woodfern can be identified by the fact that the sori (the spore-bearing structures on the undersides of the fronds) are located along the margins of the pinnules: 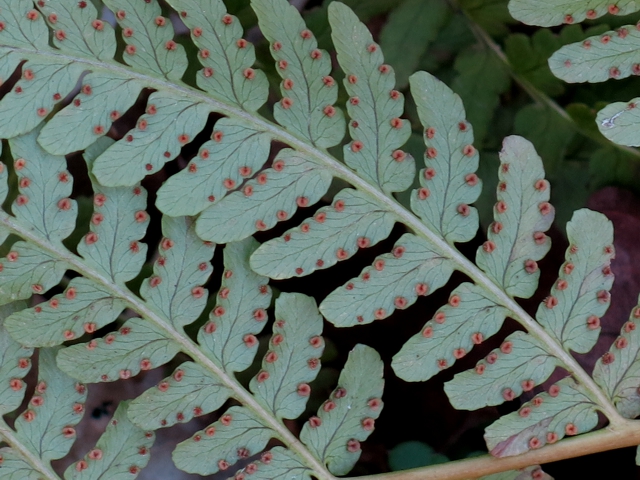 It’s still a bit early for wildflowers, although I did find the leaves of this eastern waterleaf (Hydrophyllum virginianum) poking through the leaf litter: 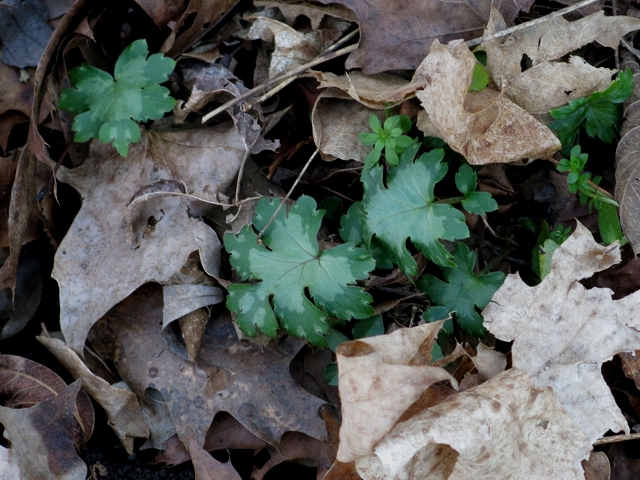 The only blooming flower that I found (actually, I think my wife found it) was this non-native purple deadnettle (Lamium purpureum): 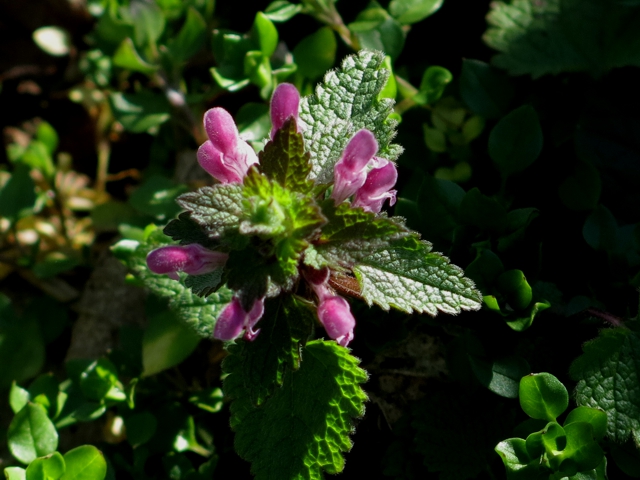 There should be many more wildflowers next month.

This entry was posted in Uncategorized. Bookmark the permalink.

10 Responses to A Walk in the Woods in February