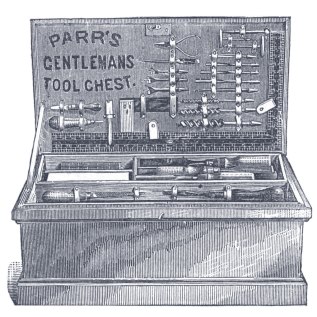 The woman who indulges in carpenter-work seldom does much harm. She contents herself with trying to drive nails into the wall, and with experiments with mucilage. She drives her nails with great caution, and when she has loosened an inch or two of plaster she becomes alarmed, and resolves to let her husband assume the responsibility of inflicting further injury on the wall.

She has a profound faith in the value of mucilage as a substitute for glue, and hopefully attempts to mend china and furniture with it; but mucilage is as harmless as it is inefficient, and it is only on the rare occasions when it is used to mend the wheels of the clock that it does any permanent injury to anything.

It is doubtless the timidity of woman which restrains her mending instincts. She dreads the saw and the chisel as treacherous tools that inevitably inflict wounds on the user, and she dislikes hot glue owing to its proneness to burn unwary fingers. Moreover, she can never grasp the difference between a nail and a screw, and regards the latter as an absurd variety of nail which can not be driven with a hammer unless the wielder of the hammer has the muscles of a man.

Thus, for one reason or another, carpenter-work as practiced by woman is harmless and inexpensive, and she knows nothing of the remorse to which the man who owns an amateur tool chest and is not wholly hardened is a prey. Nothing more surely devastating than a man with a fondness for amateur carpentry is ever found in a respectable household. The reckless inebriate who throws all the furniture out of the window does perhaps an equal amount of injury, but he can not be said to be a feature of respectable households.

There is an old proverb that is often repeated on the 1st of May to the effect that three movings are equal to one fire in point of destructiveness. It might be expanded by the addition of the great truth that one amateur carpenter is equal to two movings, and even then the destructiveness of home carpentry would be underrated.

The husband of whom the infatuated wife is fond of remarking, “He is so handy with his tools that he can do almost anything,” destroys an average amount of seventy-five dollars’ worth of furniture annually, as estimated by our most intelligent furniture dealers; and so well is this understood among the latter class that some enterprising furniture dealers sell amateur tool chests at half their cost to their regular customers, feeling sure that their business will thereby be immensely benefited.

The amateur carpenter always has perfect confidence in himself, and instead of learning humility from his many failures, he grows bolder and more reckless. He may be too busy or too tired to accede to the ordinary requests of his wife, but when she asks him if he won’t just mend the rocking-chair or put up a shelf in the kitchen, he will even lay aside his after-dinner cigar in his zeal to wield the hammer and saw.

He rarely finishes what he undertakes to do. If there is what ladies call “a squeak” somewhere in the rocking-chair, he begins the work of banishing the squeak by pulling the chair apart, and when, after an hour or two of hard work, involving great destruction of veneering and hopeless laceration of the joints of the chair, he succeeds in disconnecting the rockers, he announces that he is too tired to do anything more, and must put off the work of reconstruction until the next day.

In some cases he does resume work, and succeeds in putting the chair together again after a fashion, but it is then so scarred and maimed that he acknowledges that, it will have to go to the cabinet-makers to be “done over,” and in his pride at having removed the squeak he never seems to perceive that the last state of that chair is decidedly worse than the first.

The partial or permanent ruin of the object which the amateur carpenter undertakes to mend is by no means the full extent of the damage which he inflicts upon the furniture. If he uses the saw, he invariably places the article to be sawed on a chair, and contrives to inflict a deep cut on the chair by the zealous and incautious use of his weapon.

If he wishes to nail one piece of wood to another, he places them both on the floor, and drives his nails through the carpet and deep into the planks beneath. When he uses the glue-pot, he either lays the wet brush down upon the damask table cover, or he upsets the glue upon the carpet.

One of his most characteristic feats is that of shortening one leg of a table. Being told that the leg is too long, he saws it off so as to make it of the same length as the other legs. Invariably he finds that he has made it too short, and he then tries to shorten the other legs. There is yet to be found a single instance of a successful shortening of table legs by a man with an amateur tool chest, although several exasperated and persevering men have sawed an entire set of four legs into small pieces in the vain hope of bringing them into uniformity.

It is probable that more far-reaching injury is done by the amateur carpenter who makes articles of furniture than by the man who simply repairs them. The book-cases and single bedsteads made by the head of the family who is handy with his saw can not be thrown out-of-doors, but must remain to vex the souls of the intelligent members of the family, and fill the minds of visitors with amazement.

What is imperatively needed is a strict prohibitory law forbidding the sale of carpenters’ tools to any man who can not prove that he is a professional carpenter. Until this is done there will always be men who will buy tools, and enter upon a career of destruction of household furniture which must cause any angel with a taste for housekeeping to weep bitter though useless tears.

This entry was posted in Historical Images. Bookmark the permalink.